(FRC 2015) Hawthorne High School's Team 207 wins the most prestigious award at FIRST, Chairman's Award at the 2015 Los Angeles Regional.  The award honors the team that best represents a model for other teams to emulate and best embodies the purpose and goals of FIRST.  The Metalcrafters now have won awards at the FRC Los Angeles Regional for 14 consecutive years (2012 - 2015).  Congratulations to all of the team members!

(FRC 2014) Hawthorne High School's Team 207 competed in the FIRST Robotics Competition (FRC) at the Long Beach Arena on March 20, 21 and 22, 2014. Of the 66 robotics teams that participated, Team 207 finished in 23rd place with a record of 6 wins and 4 loses. The team was selected to be in the elimination matches and pull off a victory in one of the playoff games. A questionable foul penalty of 50 points forced Team 207 to be eliminated from the tournament.

Even though Team 207 did not make it to the semi-finals, they did manage to win three very important awards at the competition:

2. Woodie Flowers Finalist Award (Lucas Pacheco). Dr. William Murphy founded this prestigious award in 1996 to recognize mentors who lead, inspire, and empower using excellent communication skills. The students will describe how this mentor has given them the best understanding of the challenges, opportunities, and satisfaction involved in the discipline of engineering and design. This award recognizes an individual who has done an outstanding job of motivation through communication while also challenging the students to be clear and succinct in recognizing the value of communication. 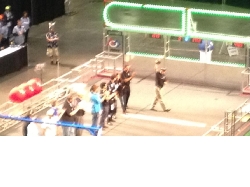